A Trap for Nightmare Dreams! 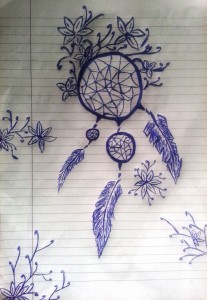 Richie the squirrel had one and the same dream every night. A strange creature came to his hollow and stole from his supplies of nuts and acorns. Poor Richie! He lost the calmness of his dream. The days were long and tensed, the nights turned into nightmares. He rushed up and down hoping to find a way out of the situation.

It was a beautiful sunny day; the birds were singing lovely songs, ferrets were playing mischievous games, everybody in the forest enjoyed the first autumn days. Only Richie was sad. Suddenly a bright idea came up into his mind and he decided to ask a piece of advice from Errol the owl. Richie told Errol his tale of woe and promised to give anything in return. The wise owl shook his head and said, “Richie, you need a trap for nightmare dreams. Only the wolves, which live at the foot of the mountain, have it. Try to induce them to give it to you for three days. I guess you have to promise them a reward.”

Richie made his way to the wolves’ tribe. When he arrived at their place he was almost ready to go back but his brave heart won over fear. Richie met the elder wolf and shared with him his problem. Then the wolf said, “Richie, I’ll give you the trap for nightmare dreams. You can have it only for three days. When you return it, bring something really valuable for you and that will be our reward.” Richie had the answer, three gold acorns. He was ready to share them with the wolves, he was not greedy.

That night Richie hung the trap above his bed and slept soundly. No creatures, no nightmares any more. The next day the squirrel visited the owl to thank and gave Errol his last gold acorn. In three days he returned the trap to the wolves and gave them their reward. Everybody was content, you tell me why?

Posted by Mariana Kolarska on 23/02/2015 in Stories and tagged Richie, trap for nightmare dreams.